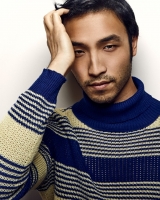 Yoson has one of those delicious types of smooth, deep voices that you could just listen to all day. With a hint of gravel he’s perfect for those soft sell commercial and narrative reads, so why not give us a call and let him carry you away.

Yoson is a New Zealand actor of Chinese descent.

His most recent feature role is the romantic lead in the Disney live-action remake of MULAN. He also stars in SBS's NEW GOLD MOUNTAIN in Australia.

Beginning his acting career in 2012, he has rapidly added an impressive collection of credits to his resume, having appeared in the international feature films CROUCHING TIGER HIDDEN DRAGON: SWORD OF DESTINY,  MORTAL ENGINES, MEG as well as lead roles in New Zealand local films MEGA TIME SQUAD and cult classic GHOST BRIDE.

Multi-lingual, Yoson is fluent in Cantonese and Mandarin as well as English, and is a skilled martial artist. He holds a black belt in karate, and has also in the past practiced kick boxing, ninjutsu, power lifting, and rock climbing.