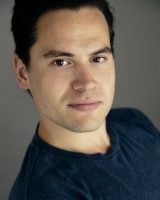 Some of his friends know his Elmo imitation very well and it was always a laugh when he performed it. He has a decent Sean Connery impression as well.

He has used his talents in theatre shows and short films while at university, appearing recently in Madagascar The Musical as Marty the Zebra, where he got to use a very cartoon-like heightened standard U.S accent.

Vasilios is a great option for retail and commercical, along with gaming and animation work.