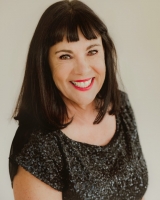 Winner of “Female Comedian of the Decade” at the 2010 NZ Comedy Guild Awards, Michele A’Court is a fulltime stand-up comedian, actor, voice artist, freelance writer and best-selling author. In October 2015 she was presented with the Reilly Comedy Award by the Variety Artists Club of NZ for achieving excellence in the field of comedy.


Michele was one of the original faces on TV3’s award-winning comedy show “7 Days” and she makes regular appearances on “The Project NZ”. She is a sought after social commentator on Radio NZ National’s “The Panel” with Jim Mora; and “9 to Noon” with Kathryn Ryan and Te Radar.


Michèle’s solo comedy show, “Stuff I Forgot To Tell My Daughter”, was a sold-out hit at the 2013 NZ International Comedy Festival and the 2014 World Buskers Festival, and was toured nationally to 35 towns and cities in 2016. That show became a bestselling book published by Harper Collins in 2015. Her second book, “How We Met – The Ways Great Love Starts”, was launched in April 2018.


Michèle has been writing a weekly newspaper column since 2008 which now appears in the print edition of “Your Weekend” and on the www.stuff.co.nz website. She relishes the opportunity to comment on current social issues. She is also a frequent freelance contributor to magazines and to www.thespinoff.co.nz


In 2013 she had a regular role in the final series of the TVNZ drama, “Go Girls”, playing Miriam Hirsch – mother of Levi and foster mother to Ted and Bennie, the lead characters. Michele is the voice of Mary-Jane Staines – and a number of other characters - on TVNZ's animated children's series, "Staines Down Drains". She has voiced a number of television and radio campaigns, and documentaries.


Her international experience as a stand-up comedian includes work in the United States, Canada, the UK, Australia, Papua New Guinea and East Timor; and she has performed at the Edinburgh, Melbourne, Adelaide and NZ Comedy Festivals.


Michele first came to NZ’s attention 30 years ago as the award-winning host of “What Now”, the children’s TV show which aired live for two hours each week, and “The Video Dispatch”, a current affairs programme aimed at youth but, according to legend, was the “must-see TV show” for New Zealand’s politicians.