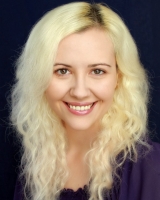 Haley Jay is an American actor based in Auckland, New Zealand who has been providing her bubbly, energetic voice to animations, video games, and other professional projects since 2015. She has an affinity for accents and enjoys bringing quirky characters to life.

Haley is also a sucker for dramatic theater, looking for any excuse possible to dress up and die extravagantly on stage before an audience. Her career goal is to portray as many villains as possible, but is currently doing very poorly at reaching it seeing as she is just too friendly. In the meantime, she happily settles for voice/screen/stage work for fellow enthusiastic creatives and values collaborating with others, both seasoned veterans and newbies alike.