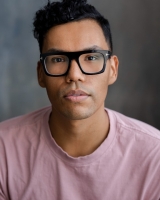 He is an actor, comic, writer, & performance-artist.

revotura, his most recent performance-art piece, was commissioned by The Hemispheric Institute of Performance & Politics and the Department of Performance Studies at NYU for the Sense of Brown: JEM Jam on September 9, 2021, a "vaudevillian, frenetic, and futuristic frenzy within the variety show tradition...a cascade of queer black, brown defiance" in celebration of José Esteban Muñoz's posthumous book, The Sense of Brown.