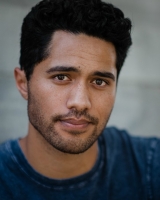 Alex hails from Auckland New Zealand and is of Māori, Samoan and Niuean descent. He is a 2012 graduate of New Zealand’s prestigious drama school Te Kura Toi Whakaari o Aoteraroa.

Following study, he played leading roles in the WW1 miniseries When We Go To War, the BBC co-production Tatau, and 3 seasons of Aussie hit 800 Words. He then joined core cast of the award-winning racy drama Filthy Rich (which streamed in the US on Hulu).

In 2019 Alex joined the core cast of the much anticipated sequel to the Australian cult series Seachange.

2019 also marked his international feature film debut, with the release of The Other Side of Heaven: Fire of Faith.

His second feature, sci-fi thriller Night Riders was shot recently in Canada, and we were lucky enough to see him back on NZ screens in local comedy gem Mean Mums.

He is currently in Hawaii playing a lead role in NCIS: Hawaii.