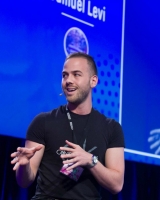 Based between Auckland and Melbourne, Samuel is a New Zealand Personality & one of the countries largest male Fashion Influencers. He was a member of the 2018 New Zealand season of Married at First Sight.

Samuel is no stranger to the fashion and entertainment industry. His presence in these spheres has seen him travel extensively abroad making appearances at the likes of Kuala Lumpur Fashion Week, Mercedes-Benz in Sydney and FWLA throughout Los Angeles.

In 2017 saw Samuel team up and work alongside International Pop Sensation Parson James forefronting the acclaimed campaign #HoldTight throughout Pride 2017.

Having made appearances, walked the runway, guest judged/spoke a number of fashion weeks around the world and taking out the title of "Fashion Influencer of the year” in 2017, saw Samuel launch his first limited edition collection into the New Zealand market late 2017. A unisex watch line.

"We recently engaged with Samuel during the Gala Dinner of the inaugural New Zealand LGBTQI Awards, held in Auckland. This was after seeing him listed as a finalist under our Local Hero category. Samuel was a great finalist as well as a presenter/MC. Samuel engaged with the audience in a professional & approachable manner, and also with his followers through social media prior, promoting the awards. Would highly recommend him for any occasion!"

"In February 2019 Samuel was engaged by the Matamata Racing Club in a Judging capacity, at our annual Fashion in the Field event. Samuel demonstrated a natural ability to take the lead and performed his duties with considerable skill. He is an extremely eloquent, confident and charming young man who instilled a sense of ease with his fellow judges and most importantly the contestants. His positive energy is contagious and he bought extra polish to this event. I would have no hesitation in recommending Samuel where the professional facilitation and slick execution of an event, is your brief."

"It was a real pleasure having Samuel Levi at Digital Day Out 2019. He brought such energy and insights to the panel debate on Influencer Marketing. He wasn’t afraid to give an honest opinion or share his personal experiences, which added a lot of value to the discussion. Thank you Samuel!”