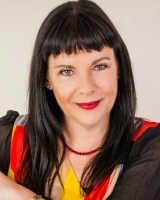 Winner of “Female Comedian of the Decade” at the 2010 NZ Comedy Guild Awards, Michèle A’Court is a stand-up comedian, writer, social commentator and corporate MC. She has been working as an after-dinner speaker, event host and conference MC for more than 20 years and is highly sought after for in-person, online and hybrid events.

Originally trained as a journalist, Michele has written two bestselling books: “Stuff I Forgot To Tell My Daughter” (2015) and “How We Met” (2018), both published by Harper Collins. She has been an opinion writer since 2008 and currently writes a weekly column for the NZ Woman’s Weekly.

Michèle is a frequent voice on RNZ National’s “Nine to Noon” and “The Panel” and is a regular guest host on Three’s primetime show, “The Project”. She has made regular appearances on the hit comedy show “7Days” since it began in 2009.

Michele first came to New Zealand’s attention 30 years ago as a host of What Now and then The Video Dispatch. Those decades of onscreen experience have been extremely useful for handling the move to online events in response to Covid-19.

Her international experience as a stand-up comedian includes work in the United States, Canada, the UK, Australia, Papua New Guinea and East Timor. In October 2015 she was presented with the Reilly Comedy Award by the Variety Artists Club of NZ for achieving excellence in the field of comedy.

Michèle is Patron of “The Aunties” Trust, a grassroots charity for women and children in need. She is also Patron of the Moving & Handling Association of NZ (MHANZ) which cares for carers in the health sector, and she is an Ambassador for Breast Cancer Cure. Michèle is a proud member of Actors’ Equity, and a Life Member of the NZ Comedy Guild.

Check out Michele's TedTalk 'Hey Ladies: Speak Up!' here + an interview from 'The Cafe' here

“Michele was GREAT! She fitted in so wonderfully. Michele was so warm and positive with everyone involved in the event and really helped what at times was quite a high pressure situation. So Michele was great to have around in the same room for three days! Her MC-ing was also very high quality and her comments completely appropriate for the subject and audience. Michele had really great energy about her. We have had really positive feedback - she was incredibly popular with the audience. Thank you Michele!”

Firstly, I’d like to extend a massive and slightly belated thank you for your contribution to the Women in Leadership Summit 2019. Without your generosity, honesty and courage it simply would not have been the success that it was. The overall event feedback has been outstanding, and it seems the mix of personal insights, organisational accountability and business case studies were very well received by the audience. Well done! “"Breath of fresh air" - Loved her courage, her different approach to break convention. She is truly challenging the status quo.”