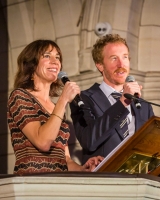 Jackie van Beek and Jesse Griffin are both actors, comedians, writers and directors living in Auckland. They have been making feature films, TV series and live comedy shows in NZ, Australia and the UK for over 20 years. Their most recent collaboration has been as co-creators of the comedy series Educators for TVNZ OnDemand. This show has been met with wide audience and critical acclaim. Jackie stars in the series and Jesse is the head writer and director.

Jackie’s recent work also includes the smash hit movie The Breaker Upperers co-created with Madeleine Sami which received wide audience and critical acclaim and is currently enjoying a global Netflix release. Jackie is a director on TV shows Wellington Paranormal for TVNZ and What We Do In The Shadows for FX in the US. In 2014 Jackie’s starring role in What We Do In The Shadows won her the Best Supporting Actress Award at the NZ Film and TV Awards. Jackie is also known for her role as inept television producer, Pauline, in Funny Girls and the unhinged newspaper editor, Gloria, in 800 Words.

Jesse has been performing comedy character Wilson Dixon since 2005, creating a TVNZ comedy special, a BBC radio series, multiple national tours in NZ and the UK and a number of awards and nominations including the Fred Award for Best Show at the NZ Comedy Festival and a Spank Award for Musical Comedy at the Edinburgh Fringe. He is also a three time nominee for best show at the Melbourne Comedy Festival. Jesse was the head writer and director of Comedy For Cure Kids co-creating the charity songs Feel Inside (And Stuff Like That) with the Flight Of The Conchords and Team Ball Player Thing with Taika Waititi. Jesse was a regular panellist and head writer on 7 Days, a core cast on 800 Words and starred in the comedy series Golden.

Jackie and Jesse bring a wealth of experience to the hosting of any corporate event or function, drawing upon years spent performing and writing for stage and screen. Key note speaking at film and comedy events as well as mentoring and teaching within the industry also allows Jackie and Jesse to feel at ease in front of crowds both large and small.

Jackie and Jesse live in West Auckland with three kids and a dog.

As the organiser of the Interior Awards, an awards programme for Designers and Architects, we were looking for Emcee's that could hold a room for the awards ceremony, deliver the right amount of gravitas to make the night special, but also have some irreverence and fun with our smart and savvy audience. Jesse and Jackie were the perfect duo, their ability to turn what could have been awkward moments into genuinely funny highlights of the show is a reflection of performers right at the top of their game. Highly recommended, unless your show is on the same dates as ours next year!

New Zealand Writers Guild enjoyed the funny, engaging and professional services of Jackie van Beek and Jesse Griffin as hosts of Script Writer Awards New Zealand 2016. Jackie and Jesse kept our evening humming along while entertaining and celebrating the local screenwriting community. Jackie and Jesse are a wonderful hosting duo who were able to create a special evening to remember for NZWG and our members.