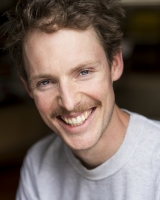 Guy Montgomery is an award-winning comedian, improviser and screenwriter. He's a familiar face from 7 Days, and every local comedy special you care to name - but is perhaps best known as co-host of the international smash podcast 'The Worst Idea of All Time' (over 6 million downloads, available from where ever you listen to your podcasts!).

A stand-up comedian whose relatable style tends towards bemoaning the everyday, he rose to prominence after winning the Billy T Awards back in 2014.

Since then, Guy has performed in Just For Laughs Sydney, the New Zealand Comedy Gala, the Melbourne International Comedy Festival, the Edinburgh Fringe Festival.

He is a core member of SNORT, the smash hit weekly improvised show that regularly sell out shows at the Basement Theatre, and (Covid permitting) do the same at various Australian Comedy Festivals.

Guy wrote and hosted 60 episodes of Fail Army for TV3, was the host and writer of U Late, and more recently he co-hosted Survive the 80's. He also writes a weekly newsletter and is a contributor for Comedy Central Australia.

A regular face on our TV screens, a recognisable voice from the radio and both of these all over the internet - Guy is a genuine triple threat!

He has been on TV, the radio and the internet, a genuine triple threat.

In comedy you’ve either got it or you don’t. Guy Montgomery has got it…”

...underplayed silliness and a casual irony that makes him a very engaging presence...