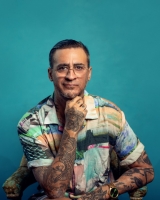 Chilean born, NZ raised Cori Gonzalez-Macuer has been working as an actor, comedian and mental health advocate for more than a decade. His stand-up has taken him all over the world, performing in the U.S, U.K, Asia, Australia and as far as South America and the Middle East.

Cori has consistently worked with NZ's best comedy talent, with roles in Taika Waititi's What We Do In The Shadows & Eagle VS Shark. Other notable screen credits include Insider's Guide To Happiness, Wellington Paranormal & Mean Mums -

Cori was fortunate to attend both Sundance and Berlin Film Festivals as part of the What We Do In The Shadows team. He performed for huge audiences in New York and L.A after the NY premiere, alongside some of the biggest names in the US industry (including Hannibal Burress, Nick Kroll, Jeffrey Ross and Kristen Schaal) - and his NZ International Comedy Festival shows regularly sell out nationwide.

Cori is passionate about mental health due to how his own life experiences have shaped him, watch his poignant TED X talk about his fathers suicide HERE.

Cori delivered a genuine and honest talk on his Mental Health journey that was raw and blended in perfectly with his candid humour. It was a special and unique way to bring awareness to mental health and the importance of having the conversation for our staff with some laughs along the way.

Delivering on his objective to expel yet another memorable show, keep an eye out for future works by the man with exponential potential, Cori Gonzalez-Macuer

Quite possibly the only show I'd return to for seconds

While his cynicism might make you think he is making lemons out of lemonade he does it in such a cool manner, standing alone with his mike, his great eyebrows adding emphasis, that you know he's speaking truths we all feel. Awesome? Nah, Bro is comedy fest at its best. Get in before the tickets dry up.