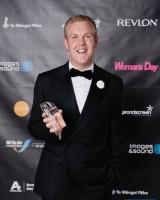 Matty has virtually grown up on our screens. Beginning as a baby-faced 20 year old, wearing an ill-fitting suit in an attempt to at least look like a grown up, he first appeared on TVNZ's Breakfast show. It was there he quickly became a firm viewer favourite. He also was the subject of constant teasing and torment from host Paul Henry, which often lead to Matty humiliating himself on national television.

After convincing the bosses at TVNZ that he'd matured, he became a reporter for One News. His time at our national broadcaster has taken him from the Chatham Islands to Malaysia, and has seen him reporting on some of the biggest national stories of our generation. He spent three weeks on the ground in Christchurch following the devastating earthquake in 2011, followed the grounding of the cargo ship Rena in the Bay of Plenty, waded knee-high through flooded rivers, and everything in between.

Following a stint in London working at international organisation Al Jazeera, and probably consuming one too many pints, he returned home after TVNZ came calling, offering him the role of Breakfast weather presenter - bringing his TVNZ career full circle. Despite the daily 3.45am alarm, Matty is so excited to share his mornings with the Kiwi public. His job now sees him travelling the country, rain or shine, to let people know if they can hang their washing out, or whether they need to pack the brolly. It also allows him to have a lot of fun along the way - he's beaten Richie McCaw in a running race, jumped out of a plane in the Abel Tasman, raced with sled dogs in Cardrona, and driven round a track with Top Gear's The Stig.

Not content with sitting still, Matty has been venturing into other avenues, including voice over work, stints on commercial radio, and recently, a guest spot on comedy quiz show Have You Been Paying Attention?

Matty also had the opportunity to tick off a life long dream in 2019, being asked to compete on the revival of reality TV juggernaut Celebrity Treasure Island, where he offered the nation a glimpse at his tough, competitive spirit.

Matty lives in Auckland with his partner Ryan and their dog Otis. He's a fiercely competitive indoor netball player, is learning the ins and outs of DIY on his first home, a loyal Hufflepuff, and will never stop watching re-runs of Friends.

Matty is known for his relatability, his wit, and his charm. At least according to his mother.

We hired Matty for the Hendrick's National Kubb Open 2019. He was extremely professional, personable and warm. Matty was really great with off the cuff commentary throughout the day and any changes that occurred he was able to roll with. We would absolutely recommend Matty, he will certainly bring a spark to your event!

Matty was fantastic! He held the attention of the large audience and used tone and language that connected them to the event's themes. Matty was very easy to work with and took the time to greet and connect with the listeners. Thanks for not only sharing your important message, but also for being such a captivating speaker.

Matt co-hosted the annual Miss Universe New Zealand event held in Wellington over a three-year period from 2010-2012. Matt also filmed and interviewed the contestants at rehearsals for TVNZ. Matt was always a real pleasure to work with, and was very popular amongst the contestants and our executive committee alike. Matt is extremely polite, courteous and considerate of every situation, acting in a professional manner at all times. I would have no hesitation in recommending Matt for any function

Matty was an excellent MC for our recent event. He had high energy, kept the crowd entertained, and was able to adapt to changes very easily. Matty and his team were very easy to work with.