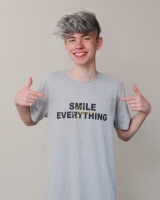 Zephan travelled America in 2019 on the Boys of Summer Tour & was booked for Playlist Orlando 2020, before Covid-19.

Zephan is an English-born Social Media influencer who has been living in New Zealand for four years. Gaining a lot of attention since early 2017, his Social Media fan-base has sky-rocketed.  He started Social Media to express himself after being bullied in school for being different, which is why he is an advocate for anti-bullying campaigns and teenage mental health issues. He loves comedy, making people smile, and being a positive voice to people his age. He enjoys performing live and in front of the camera. He also makes short films about anything that grabs his interest. Outside of Social Media, Zephan is also interested in fashion, music and traveling.

Zephan's biggest following is on TikTok (formerly known as Musical.ly), where his creative videos have earned him over 3million fans on the app.