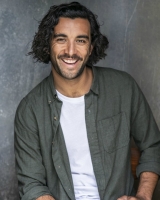 Tom Paterson is from New Zealand. He grew up surfing, playing basketball for New Zealand internationally, and later studied teaching at university and taught primary schools for many years. While he still loves teaching, a few years ago Tom decided to take a different route and delve into the world of creative arts.

Tom now works as a fashion & travel photographer, actor, and sometimes-model. He has acted in commercials, short films, and - most recently - was one of two finalists on the internationally acclaimed series Survivor.

2019 was a big year for Tom; he worked at Coachella Music Festival capturing content for Revolve, as well as shooting campaigns for Country Road, Afends, Marc Jacobs, and The Marriott Group in America, New Zealand, and Australia respectively.