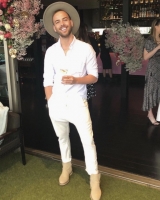 Based between Auckland and Melbourne, Samuel is a New Zealand Personality & one of the countries largest male Fashion Influencers. He was a member of the 2018 New Zealand season of Married at First Sight.

Samuel is no stranger to the fashion and entertainment industry. His presence in these spheres has seen him travel extensively abroad making appearances at the likes of Kuala Lumpur Fashion Week, Mercedes-Benz in Sydney and FWLA throughout Los Angeles.

In 2017 saw Samuel team up and work alongside International Pop Sensation Parson James forefronting the acclaimed campaign #HoldTight throughout Pride 2017.

Having made appearances, walked the runway, guest judged/spoke a number of fashion weeks around the world and taking out the title of "Fashion Influencer of the year” in 2017, saw Samuel launch his first limited edition collection into the New Zealand market late 2017. A unisex watch line.

2020 has seen him launching his own beauty range 'One Figure by Samuel Levi' - watch this space.

2017 - NZ Fashion Influencer of the Year