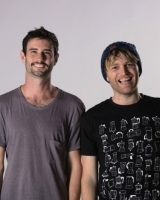 Josh & Mearle are a kiwi duo producing their own unique and quirky flavour of comedy. Meeting at the University of Otago in 2005, Josh and Matt (Mearle) become fast friends. Despite not studying anything media related, they found themselves creating silly comedy videos in their spare time. This quickly escalated to an obsession, and before long they changed their degrees and decided to go all-in on their burgeoning comedy careers.

Their hard work has certainly paid off, with Josh & Mearle having worked across numerous television and web series, attracting a sizeable social media following along the way.

With a genuine passion for making people laugh, the troops have very high standards - which is evident in the quality content they produce. They're good natured, with a knack for delivering clean and polished humour - striking a chord with a very wide audience.

In 2016, they found success with their first TVNZ webseries, Blade NZ. The hilarious and highly acclaimed series has since been acquired by the Travel Channel, and was re-edited into a broadcast show format. The show is now aired in over 100 countries, and has been translated into 22 different languages.

It was at this point that editor Tom Reed joined the team. The trio went onto found Jumbo Media where they continue to create as many crazy projects as they can.

The boys have recently completed their latest travel comedy series, Misadventures, which aired on the DUKE channel and TVNZ on Demand. They're also developing a series of Vlogs, sharing behind the scenes footage showing the ups and downs of starting a video production business and working towards their dreams.

- They love to make people laugh

- Their high standards: consistent quality in all aspects of production

Over the past few years, Josh & Mearle have been building a huge body of creative work, including: