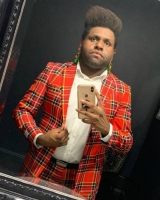 Ian Zaro is writer and performer from Townsville, Queensland but based in Auckland.

A natural class clown, Ian began uploading videos of himself lip-synching on the DubSmash app and rapidly established a significant online following. Thanks to his colourful and energetic musical renditions and sketches Ian’s social media channels have grown to 1,900,000 + followers and over 20 million views.

Ian is easily recognisable with his signature fro hairstyle and variety of coloured robes. In 2016 Ian was approached to be part of the Black Comedy Season 2 ensemble – a role that gained him national recognition as a leading Indigenous comedian and performer. As an MC and presenter, Ian now makes appearances at numerous festivals, community and corporates events around Australia, where he continues to engage, and entertain audiences with rave reviews.

When he is not working, Ian also advocates for a number of organisations and causes. Ian actively participates in public speaking gigs, workshops, marketing, ambassadorships and youth mentoring. He at a time worked at TAIHS Youth Homeless Shelter whilst balancing his entertainment commitments.