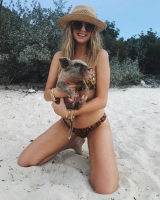 Cartier Lee is an Australian-born actress, model and musician. She is a recent graduate of the prestigious NYU Tisch School of the Arts in New York City. Cartier majored in acting and minored in psychology. During her tenure, Cartier honed her craft while participating in the specialized Stonestreet Advanced Film & Television program. She also studied in the renowned Stella Adler Studio. Cartier graduated in 3 years (not the standard 4) as an Honours Student on the Dean’s list, with a GPA of 4.0.

Cartier is also an accomplished recording artist, Dj and writer who works with Randy Jackson in Los Angeles. Her pseudonym DJ Pebbles debut single “To Not Love You” reached Top 10 on the Billboard EDM Club Charts. She immediately followed with her second single “Heart Away From You” which reached number 5. Cartier has trained privately with Jean- Louis Rodrigue in The Alexander Technique since she was 16, and, has attended many workshops with Larry Moss in New York and Los Angeles.

Cartier also completed a month-long program at Shakespeare and Company in Massachusetts. Cartier has worked with many Australian and American brands and companies through social media. Cartier’s Mangement is Shelley Browning from Magnolia Entertainment in Los Angeles who represents Actors such as Rachel Mcadams, Rosamund Pike and Dev Patel.